As Nagaland kicked off its biggest festival of the year, the Hornbill Festival 2022, today in Kisama, it took centre stage in one of India’s most auspicious days – the day India assumed the G20 presidency. 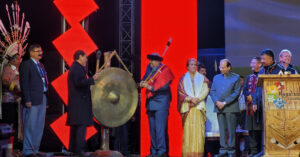 The 23rd Hornbill Festival was also a showcase for India to the rest of the world, as Vice-President of India, Jagdeep Dhankhar, inaugurated it.

The Vice President expressed delight at his visit, describing Nagaland as a “pinnacle” and a “culture of cultures.”

He also described the day as “historic,” adding that the world will be able to experience Naga hospitality when the G20 meets in the state in April of next year.

The Vice-President praised the Nagas for their distinct culture and glorious history, stating that India was proud of its tribe.

Vice President Dhankhar earlier this year in November stated at the 19th ASEAN-India Summit that the India-ASEAN (Association of Southeast Asian Nations) relationship is a central pillar of India’s Act East policy.

Given how Asia’s growth trajectory has shifted the global balance away from western economies and toward Asian economies over the last decade, Asia’s rise is inevitable. This makes the North East Region, which serves as India’s gateway to Southeast Asia, more strategically important than it has ever been.

Southeast Asian countries such as Myanmar, Thailand, Vietnam, Laos and even southern China are culturally, ethnically, socially, and linguistically closer to the Northeast than the rest of mainland India. As a result, when culture evolves as “soft power,” it is relative to politics, economics, and the military.

As a result, Northeast Region’s development has always been primarily strategic.

“The key to stability and outreach to the East lies in resolving the longest festering Naga insurgency,” he claims.

“For Nagaland, the Hornbill Festival transcends its original intent. It is an assertion of normalcy and a victory for the forces of peace over those of violence. It is an example for other disturbed states in India, as well as other parts of South Asia, of how peace truly can be won,” he adds. 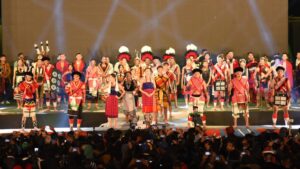 “The success of this festival also shows how economic initiatives can transform a troubled region into one of the fastest developing states in India,” he writes, adding that the Hornbill Festival is only one manifestation of the region’s change.

As India assumes the G-20 presidency, with Prime Minister Narendra Modi calling for a “fundamental mindset shift” to shape a new paradigm of human-centric globalization, India demonstrated its strength of ‘Unity in Diversity’ through the Hornbill Festival, a festival that echoes the same, ‘a principle that the European Union has always believed in,’ according to honoured guest, Lenain.

Meanwhile, Barry O’Farrell AO has nothing to say except that he is optimistic that beginning next year, 86% of Indian products in Australia will be tariff-free, including the ‘remarkable’ textiles made in Nagaland.

And the implication of all of this can be seen in the fact that today’s three honored guests – Lenain, Gemmell, and Barry O’Farrell AO – all expressed a common interest: strengthening connectivity and trade.