Er Meshenlo Kath, now 33, attended Model Higher Secondary School in Kohima and earned a Bachelor’s degree in electrical engineering from Madhya Pradesh before returning to his home state of Nagaland where he found there wasn’t a single advertisement from the state government for him to apply for an exam in a long time.

This compelled him to file an RTI, only to be confronted with a data set replete with backdoor appointees in class I and II gazette positions. Aghast over the grim reality, Kath ventured into demanding his rights for himself and for educated youths like himself who were denied the opportunity to sit for a fair examination, thereby turning him into an activist.

During his activism, Kath was reportedly offered a Junior Engineer position but he refused because he was concerned about capable candidates missing out on the opportunity. So, he began earning a living as a Civil Services Aptitude Test (CSAT) teacher in various coaching institutes.

“I, as a layman with no political ties, was able to demand that the NPSC provide answer keys…”

9 years of activism, he said, has made him grow personally, such as breaking free from his shy nature and becoming more aware of his actions. While politically, he believes that his experience, as well as the corruption and manipulation he witnessed in the system, compelled him to enter politics.

Kath is also the convener of the Combined Technical Association of Nagaland (CTAN) and has been vocal in their opposition to various systems, most recently asking the Nagaland Staff Selection Board (NSSB) to eliminate interview marks.

Kath admits to seeing some positive results from his activism, but he claims it was all the result of hard work in which they had to agitate in the form of protests and hunger strikes. He believes that getting elected will make such changes more effective and easier to implement.

Recalling how he, as a layman with no political ties, was able to demand that the NPSC provide answer keys after such a long demand through protest and hunger strike, he said, “If I, as a layman, can do that- imagine how powerful it will be if an elected member stands and speaks such issues in the Assembly.”

“There is no need to go all out, protest, and go on hunger strike to seek our rights,” he responded when asked why he is entering the political system and why he believes it will be effective.

Kath, a Rengma Naga who grew up in Kohima town – largely dominated by the Angamis – is up against the political big shot, the incumbent MLA Dr. Neikiesalie Nicky Kire in 9 Kohima Town A/C along with two or more other intending candidates.

As claimed by Kath, “Naga politics is quite tribalistic,” however, a silver lining hope, he claims, is “young Nagas are more inclusive and open-minded and are doing away with tribalism.”

“My childhood friends and my friends are all Angamis and they are the backbone to my campaign and my current position. Even my party president is an Angami. The tribal card will not affect 2% of the people here (Kohima town),” he said. 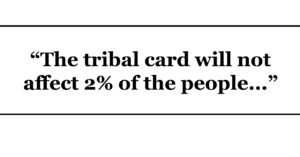 He agreed that many elders’ old mindsets had stifled Naga society’s progress and that tribalism has been one.

“Just compare smartphones and old landline telephones. Can we even compare? That is just logic. Old model is an old model. We need to change at some point,” he said, referring to how it is mostly the elders that hold tribalistic views.

“We need the support of elders and parents but we are very much focused on the unused resources,” he said, referring to 8,000 young voters in Kohima town whom he claims do not turn up to vote.

“We want to encourage and educate the 8,000 voters to make use of their valuable vote in order to see a change. Of course, at the same time, we are seeking support from the elders,” he said.

Speaking of elderly voters, he stated that many of them who have seen his interviews and know him have responded positively and extended their support.

“Of course, there are some who are hesitant, but I am pleased to learn that their sons and daughters are encouraging them to change their minds,” he said.

“So far, I have not found anything fruitful in what the government has done for entrepreneurs.”

Kath, who intends to run on the NPP ticket, said the party’s motto for youth empowerment, education, and empowering the North-East inspired him. Speaking of youth empowerment, he believes that, along with critical changes in the NPSC, service rules, and so on, entrepreneurship is the need of the hour.

He claims that there are over 356 PMEGP (Prime Minister’s Employment Generation Program) schemes that are not currently being implemented in the state.

“A lot of the cases involve money being withdrawn but no work being done,” he explained.

He mentioned that he believes he can promote entrepreneurship more effectively through the Local Area Development Fund.

“Kohima is a small town. There are many talents, but because it is such a small area, we cannot find enough potential youths who are skilled in their own art, such as handicrafts. So I want to use that Local Area Development Fund to encourage more entrepreneurs,” he explained.

He then shared an experience in which he wanted to generate electricity with less water but received no assistance from any department or people.

“In the government’s yearly budget, they mention a specific scheme that says a specific fund will be allocated for some energy generation unit or something, but I didn’t find such implementation in reality.”

“Why wait until tomorrow when we can change now?”

Despite numerous reports of corruption, misgovernance, and incompetence, Naga youths continue to remain silent, which he attributes to three factors.
“One, there is fear that they will be targeted like in their service; two, we are fully ignorant; and three, in one way or the other, their parents are involved in corruption.”

However, he believes that things are changing and that Naga youths will be able to break free from this shackle.
“Why wait until tomorrow when we can change now?” he asked, while concluding that he believes soon the youths will start coming forward.