It is a recognized fact that women’s participation in sports is pivotal to achieving gender balance in the society at large. Today, however, very few women in Mokokchung have opted to pursue careers in the realm of sports or have achieved success in sports disciplines. It is indisputable that men still dominate games and sports compared to women.

According to Tiakumzuk Yaden, a member of Wasang FC, Mokokchung, and an 18-year long-time serving member of Bwana Sporting Club, Mokokchung, women were once considered frailer than men, and women were expected to stay home and look after the children. Breaking societal stereotypes, he underlined that both men and women have a plethora of choices in today’s world. He also argues that Nagaland’s education system is at fault for the lower participation rate of female athletes and the diminishing appeal of women’s sports. He said that sports is characterised as just an extracurricular subject or activity that is not given due importance.

“The boys played basketball, but there was no teacher to direct them or explain the rules of the game,” Tia reminisced of his school days. “The girls did nothing but stand outdoors during the sports session, or the so-called drill period,” he continued. Further, he discussed the significance of public sporting facilities and initiatives for women, which are lacking in Mokokchung. In order to involve more women in sports, he presents a strong argument for “regular sports camps and sensitization of the public on recognizing the sports sector as an employment avenue.” Tia proposes that the state government and the Department of Youth Resources & Sports should focus on the optimal use of financing and programs that would allow athletes of both genders to flourish in the state.

Imtilong Longkumer, a Grade II National Umpire under Badminton Association of India (BAI) also stated that because Nagas are a patriarchal society, women are not exposed to sports or any outdoor activities. They were mostly confined to household and family responsibilities.

In a more in-depth discussion of the issue, he stated that education for women had only recently begun, resulting in their exposure to sports as well. However, women are not encouraged to participate in sports on a large scale; they receive modest positive consent and support from family and friends and the education system does not promote it on a large enough scale. Another major factor leading to lower female participation is a lack of future prospects for sports offered in Nagaland, he adds.

Reflecting on the aforementioned statement, he also mentions how less promotion leads to lesser participation and, hence, less popularity. Despite the criticism, he continued, “There is always space for growth.”

When discussing the practical approaches to growing in or getting better at women’s sports, he stressed that change must start with the mindsets of family members and society as a whole, allowing women to choose or pursue their passion and objective. Also, he added, the school and church can play a pivotal role in promoting sports and making female athletes partake in them. He also said that the state government should open doors and inspire female athletes by giving them access to platforms and scholarships that will allow them to pursue sports and athletics as a career.

Meanwhile, Nungsangyanger, Mokokchung District Football Coach, claims that the lack of female athletes in Mokokchung is primarily due to a lack of proper physical education in schools as well as limited opportunities. He cited another important reason: the lack of exposure provided to women despite the opportunities compared to men. He agreed that there should be no gender disparity in athletics and that both genders should have equal access to opportunities. “If men can do it, why can’t women?” he remarked.

Two women from Mokokchung who are active in sports today

Having been brought up in a sports-loving family, Watinaro Pongen grew up listening to the narrations of her parents and their passion and endearment for sports. She was able to narrow down her interest in sports as a result. Wati is a resident of Mongsenbai Ward in Mokokchung and hails from Longsa Village. She participated in a variety of sports; however, to be more precise, badminton is the one in which she has played professionally. She represented Nagaland a couple of times and bagged silver as well as gold medals in several tournaments.

Despite various achievements, Wati expressed that she has had her fair share of failures as well. She did, however, say that she reminded herself that today’s mistake did not determine tomorrow’s outcome and that she did not let those failures become an impediment to her constant strive to be a better player. She stated that it took a lot of effort and years of dedicated practice to be here today and be able to play even at the state level. “It was a fruitful journey by God’s grace, alongside unconditional support from my family and proper guidance by different coaches throughout my twelve years as a badminton player,” she highlighted.

Wati revealed that she was introduced to cricket by a good friend during her college years. She claimed that after giving it a shot as a cricket fan, she was selected for the Nagaland team to represent the state in domestic matches within a month. She continued by saying that during her first tour, she was taken as a substitute player, which allowed her to learn more knowledge about the sport and allowing her to witness the level of competition among the top players from various states. As such, she added, it inspired her to go outside her comfort zone.

“Through perseverance and hard work, I am currently playing for Nagaland, and my future plan is to pursue cricket as my career with the aim to play at a higher level,” she stated.

~ She participated as a substitute in the Senior Women’s One-Day Tournament, which was held in Pondicherry from February 18 to March 20, 2020.

~ Represented Nagaland Cricket Association in Under-19 One Day Tournament held in Bhubaneswar from September 30th to October 5th, 2021.

~ Currently, she is preparing for the upcoming Under-19 One Day Tournament scheduled from December 7–14 in Trivandrum, Kerala.

She also commented on women’s sports, claiming that when it comes to sports, Nagas aren’t particularly interested in pursuing a career in it. She explained that this is due to a lack of support from the government, family, and others. On the bright side, she added, we see a ray of hope in the general public’s growing awareness of the importance of sports. She went on to say that sports are good for both one’s health and one’s wealth. “While men dominate most sports, there are some fields for women that should not be overlooked,” she concludes.

Lanunechetla Longchar, a 22-year-old athlete from Chungtia Village, is another role model for women in sports. She is presently pursuing her master’s in Social Work in Shillong. She had always enjoyed basketball since she was a little child, but her parents had forbidden her from participating in sports owing to her health problems. During her first semester at college in the year 2019, she started playing basketball. She declared, “I’ve been playing for four years, but the more I play, the more I adore this game.” She went on to say that since there aren’t many female basketball players in Mokokchung town, the court is typically occupied by men. She further added that every time her brother went to court, she constantly asked if she could join him, but she was always told not to, saying there were only men in the court. 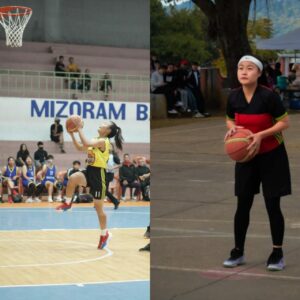 “Since I believed that girls can play too, I never felt inferior because of my gender; I convinced my brother in some way, and I then began to follow him,” she said.

She revealed that while she was in college, she made some good friends with whom she used to play every day after classes. She said that she miraculously made the college basketball team during the selection process while she was in her first semester. She continued by thanking her coach for selecting her because that is how her adventure began.

In God’s favour, according to Achet, she was given the chance to compete for the Mokokchung district in the Nagaland Olympics in 2022, and the coach selected her as captain.She announced through the Olympics that she was chosen to represent Nagaland women’s state team at the 72nd Senior Basketball Nationals North East in Mizoram in September 2022, and again at the North East Olympics in Meghalaya in November 2022.
During the 72nd Senior Nationals and the North East Olympics, Achet was also chosen to serve as a vice-captain of the Nagaland women’s state team twice. Her goal to play for her home state Nagaland has endured since she first began playing basketball. “I was able to comprehend my dream,” she said. “I believe it is just the beginning of my adventure with basketball; there is a long way to go,” she added.

Achet further said that despite the fact that the route has never been easy and never will be, it has been worthwhile. She hopes Mokokchung will produce more female basketball players. In her conclusion, she acknowledged that when we embrace basketball, it is more than just a game. “One must not restrict dreams and give up; one must fight hard to accomplish them,” she concluded.